A commemorative postage stamp on the National Children’s Day 2000 : 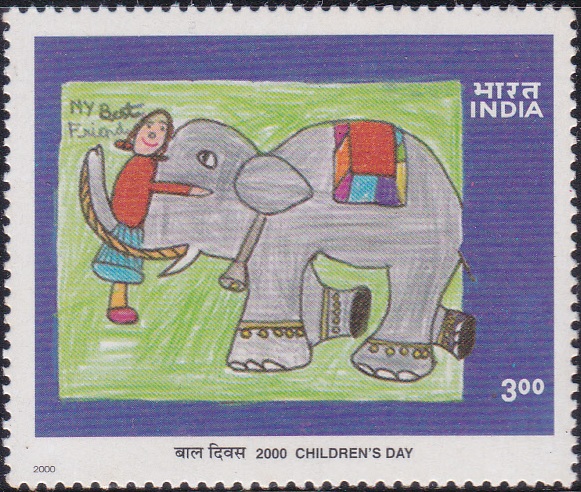 Issued for : On its part, the Department of Posts issues a special stamp every year, to mark Children’s Day, underlining the country’s responsibility and commitment to meeting the needs and fulfilling the rights of children. Various issues involved in child survival, protection and development have been highlighted through stamps issued on themes like nutrition, shelter, education, recreation, children’s literature, children’s paintings, empowerment of the girl child etc. In recent years, it has become customary to issue stamps on Children’s Day depicting prize-winning entries from nation-wide Stamp Design Competitions organised by the Department. These stamps, thus, also provide an insight into the minds of the younger generation, into issues which are of concern to them.

Design : The year’s stamp, based on a painting by Phuhar Uppal which won the top honour in the Junior Category, depicts a child hugging a friendly elephant and carries the title “My Best Friend”. The elephant becomes a metaphor for nature in the painting and its benevolence, a symbol of the unlimited bounties that nature provides the human race. The tranquillity and harmony of this painting gently reminds the viewer that the harmony of man with nature needs to be maintained. At the same time, it also reiterates the need for all nations to join forces against the destruction of ecological balance. The First day Cover carries a painting by Daya Maheswaran, another entry received in the Stamp Design Competition, which also carries an appeal for the protection of environment.