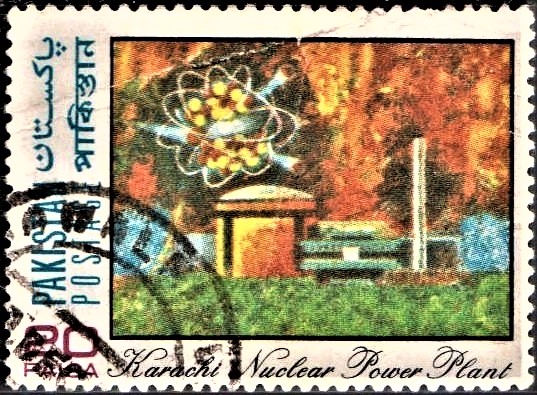 Design : The Format of the stamp is horizontal. Within a rectangle, the nuclear power plant is shown near the lower half portion in Red, Yellow and Black colours. The Blue patches on either side of the plant represent “Heavy Water” used in the plant. The lower Green horizontal portion indicates the lawn while the warm back-ground colours (Red, Yellow and Orange) of the sky at the top signify the tremendous heat evolved in the splitting of the atom.

On top left side, the mass of tiny Red and Yellow balls with few orbits around and a few balls emerging out represents the phenomena of ‘Fission of the atom‘ (The above is an artist’s concept of the splitting of Uranium atom).

“Pakistan” in Urdu and Bangla and “Pakistan Postage” appear in blue at the left side of the rectangle while the caption “Karachi Nuclear Power Plant” in script appears at the bottom of the rectangle in Black. The denomination “20” with “Paisa” underneath appears in red in the lower left corner of the stamp.