A commemorative postage stamp on the Birth Centenary of Laxminath Bezbaroa, pioneer of modern Assamese literature from Jonaki era : 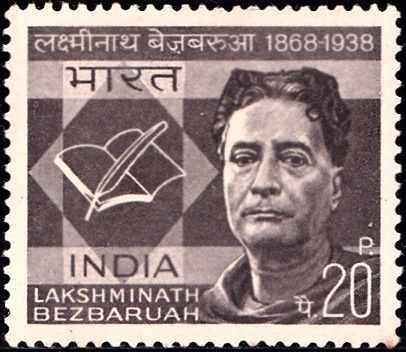 Issued for : Lakshminath Bezbaruah was not only a literary figure of outstanding eminence but a distinguished leader of modern Assam. This is the centenary year of his birth and the Posts & Telegraphs Department is proud to associate itself with the celebrations by issuing a special postage stamp to honour this great son of Assam and of India.

Description of Design : The design of the stamp is horizontal and depicts a portrait of Lakshminath Bezbaruah at the right half side of the stamp. A line sketch of an open book and a quill is shown in between the word ‘Bharat’ and ‘INDIA’ in Hindi and English respectively at the left border of the stamp.