A commemorative postage stamp on the 250th Anniversary of the Bombay Dockyard, an Indian shipbuilding yard at Mumbai : 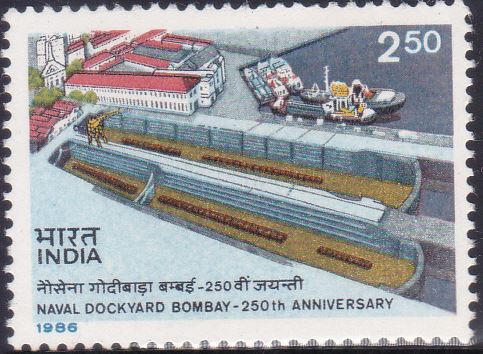 Issued for : The Department of Posts is privileged to issue a stamp on this occasion.

Description of Designs : The stamp depicts a bird’s eyeview of the Bombay Dock at the front and the Duncan Dock behind it nearer to the administrative building. These monumental docks, though over 150 years old still serve the needs of Indian Naval Ships and Submarines alike. The first day cover depicts the crest of the Naval Dockyard, Bombay. The cancellation is the adaptation of the Logo of its 250th Anniversary Celebration. The stamp, the first day cover and the cancellation have been designed by Capt. Anil Dhir, Indian Navy.