Complete set of 3 nos. of commemorative postage stamp on the 6th Anniversary of the RCD : 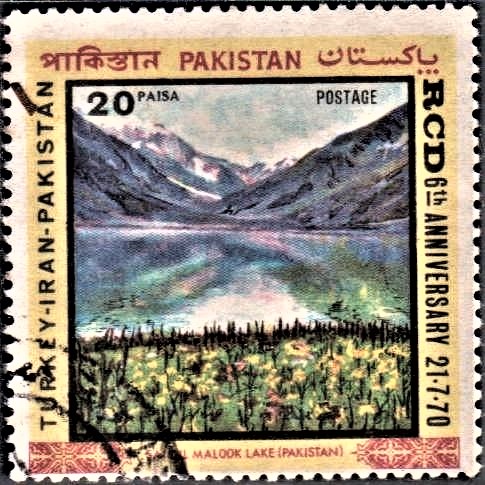 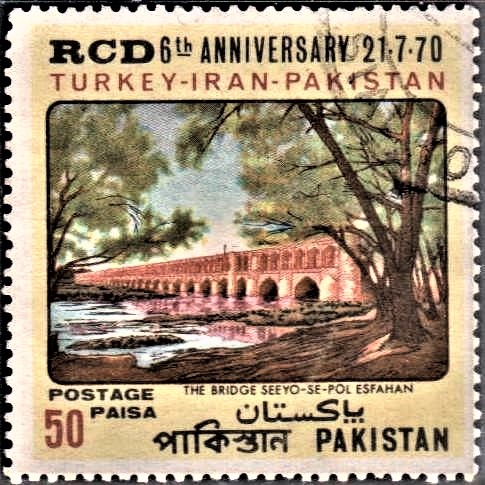 Issued for : To mark the Sixth Anniversary of the establishment of the Regional Co-operation for Development, the Pakistan Post Office is issuing a set of three commemorative postage stamps of 20-Paisa, 50-Paisa and Re. 1.00 denominations. Sets of three commemorative stamps in similar designs are also being issued simultaneously by the Government of Iran and Turkey.

Design :
20 Paisa : Depicts the ‘SAIFUL MALOOK LAKE‘ of Pakistan, enclosed by a border in yellow colour, bearing the words ‘Pakistan‘ in Bengali, English, and Urdu in red colour on top of the stamp. The patterns in the bottom corners as well as the words ‘SAIFUL MALOOK LAKE’ (Pakistan) are also in red. The caption ‘R.C.D. 6th Anniversary 21.7.70′ and the words ‘Turkey–Iran–Pakistan‘ are in black. The value ’20-Paisa’ and the word ‘Postage’ are also in black and are placed on the sky.

50 Paisa : Portrays the bridge ‘SEEYO–SE–POL‘ at Esfahan set in a yellow border. The top of the border bears the caption ‘R.C.D. 6th Anniversary 21.7.70′ in black colour, the words ‘Turkey–Iran–Pakistan‘ in brown. The lower border bears the value in the lower left corner. The figure ’50’ is in brown, and the words ‘Postage’ and ‘Paisa’ in black. The words ‘The bridge SEEYO-SE-POL-ESFAHAN’ and the words ‘Pakistan‘ in Urdu, Bengali and English are also in black.

Re. 1/- : Reproduces ‘a view from Fethiye‘ in Turkey. The layout is the same as in 20-Paisa stamp. A yellow border surrounds the view. The top of the border bears the words ‘Pakistan in Bengali, English and Urdu in red colour as well as the words ‘a view from Fethiye, Turkey‘ in the lower border, below the illustration. The caption ‘R.C.D. 6th Anniversary 21.7.70′ and the words ‘Turkey–Iran–Pakistan‘ are in black. The value Re. 1/- and the word ‘Postage’ are also in black and are placed on the sky.

Quantity printed : 10,00,000 pieces of each denominations