A commemorative postage stamp on the Centenary of Invention of the Phonograph by Thomas Alva Edison, and Development of sophisticated Recording Industry : 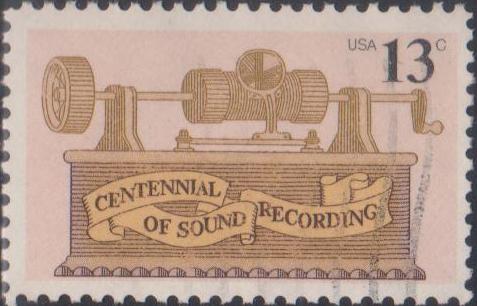 Issued for : From rudimentary mechanical grooves in hand-wrapped tin foil to high-fidelity electromagnetic tape mass-produced in quadraphonic cartridges – a century of sound recording progress, 1877-1977, is commemorated by this U.S.A. 13¢ stamp.

Design : Stamp designer Walter Einsel of Westport, Connecticut, depicted a stylized version of the original photograph, by which inventor Thomas A. Edison in 1877 heard the world’s first playback of recorded sound: his reproduced voice reciting “Mary Had a Little Lamb.” The diaphragm of this simple device concentrated the vocal vibrations into the stylus, which inscribed them on the foil around a cylinder, cranked by hand.