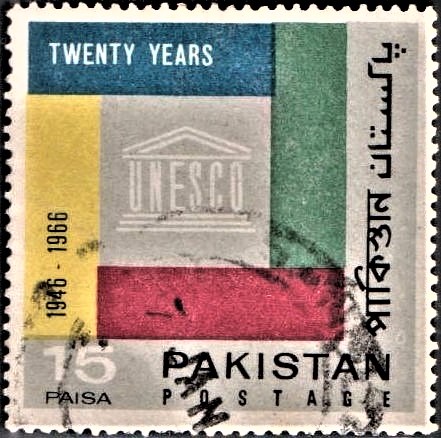 Issued for : To commemorate the 20th Anniversary of UNESCO the Pakistan Post Office is issuing a postage stamp of 15 Paisa denomination on the 24th November, 1966.

Design : The design indicates the ‘UNESCO’ emblem enclosed by four heads of colour forming a square. The emblem appears in reverse against a grey background. The area left out by the square is also in grey colour in which appears the word ‘PAKISTAN’ in Urdu, Bengali and English in clock-wise direction. The word ‘Postage’ appears in small letters underneath the word ‘Pakistan’. The denomination figure 15 appears in reverse in the bottom left corner with the word ‘Paisa’ in black underneath. The wordings “Twenty Years” appear in white in the sky blue strip and the years “1946-1966” in black in the yellow strip.