A commemorative postage stamp on the Silver Jubilee of HBL Pakistan (1941–1966) : 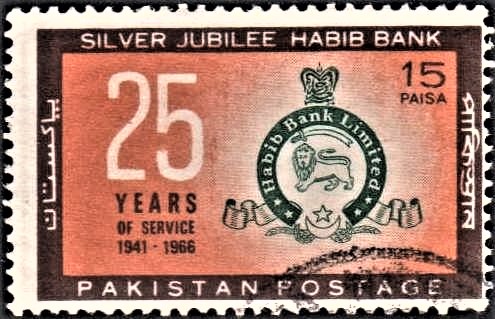 Issued for : To commemorate the Silver Jubilee of Habib Bank of Pakistan, the Pakistan Post Office is issuing a postage stamp of 15 Paisa denomination on August 25, 1966. With the issue of this stamp, national progress in the private sector would, for the first time, be highlighted.

Design : The crest of Habib Bank is the main feature of the design which appears on the right hand side in green colour against a white halo in the orange background. On the left side appear the words “25 years of Service”. The words “Silver Jubilee Habib Bank” and “Pakistan Postage” are shown in reverse in the frame at top and bottom respectively. The word “Pakistan” in Urdu and Bengali in reverse appears on the left and right respectively in the frame. The denomination appears in English at top right corner.