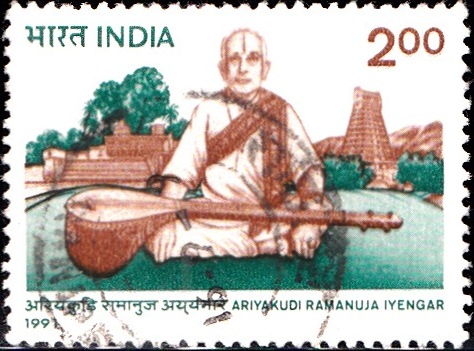 Description of Designs : Besides the portrait of Ariyakudi, the commemoration stamp depicts two famous shrines spiritually and professionally close to Ariyakudi – the Samadhi of the great saint composer Sri Thyagaraja at Thiruvaiyar, a centre of great tradition where Ariyakudi contributed substantially in many ways and the temple at Srivilliputtur, of Andal an Alwar of Vaishnavite Philosophy, worshipped as the mother-goddess, whose Thiruppavai, the best known of her devotional songs, he set to music and unfailingly presented in his concerts.

Credit for artistic work for the stamp is due to Sri Jagadish Sharma. Credit for design of the first day cover as well as cancellation stamps is due to Sri M.A. Hedao a very senior Architect.