A commemorative postage stamp on Eradication of TB : 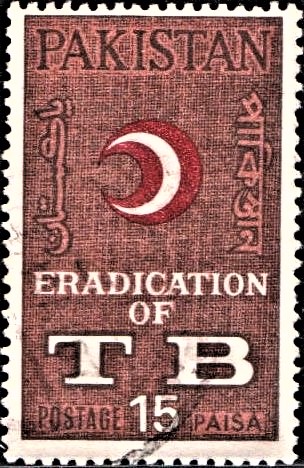 Issued for : Every year, during Eid-ul-Fitr, the Pakistan National Tuberculosis Association issues T.B. Seals and launches a campaign for their sale. Through the sales of T.B. Seals an attempt is made to reach the common man and make him conscious of the scourge and seek his individual help in its eradication. To give an impetus to this campaign, the Pakistan Post Office is issuing on 10th January, 1967 a postage stamp of 15 Paisa denomination.

Design : Intricate mesh work in black appears over brown background with words “Eradication of T.B.” and “15” in reverse lettering. The word “Pakistan” in English, Bengali and Urdu appears at the head, right and left of the stamp respectively. The words “Postage” and “Paisa” appear at left and right of the value “15” at the foot of the stamp. The insignia of T.B. Association appears at high centre of the stamp.