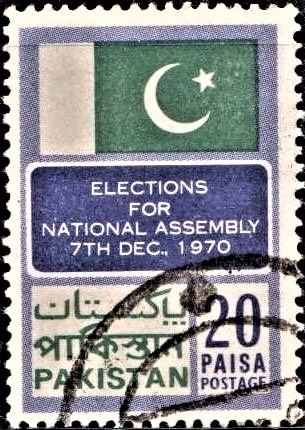 Issued for : To commemorate the First General Elections for National Assembly in the country, the Pakistan Post Office is issuing a stamp of 20-Paisa denomination on December 7, 1970.

Design : The format of the stamp is vertical. The top portion bears the flag of Pakistan, the central portion has the words ‘Elections for National Assembly, 7th December 1970′ in reverse against a blue background. The words ‘Pakistan‘ in Urdu, Bengali and English in the left lower corner of the stamp are in green. The value “20 Paisa” and the word ‘Postage’ are in the lower right corner of the stamp.