A commemorative postage stamp on the 2nd International Conference Seminar of Tamil Studies in Madras : 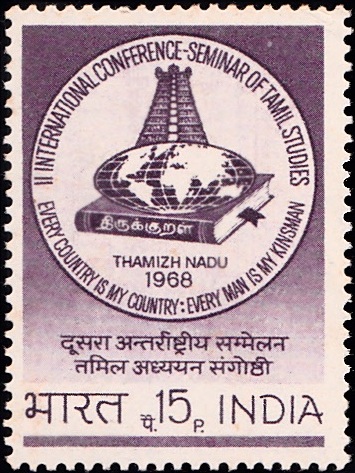 Issued for : The Posts & Telegraphs Department is happy to bring out a special postage stamp in commemoration of this important event in the cultural life of the country.

Description of Design : The stamp depicts the emblem of the Conference. It portrays the globe and a temple tower resting on a book with the word ‘Thirukkural‘ on it in Tamil script. It also bears the legend – ‘Every country is my country; every man is my kinsman’ a maxim propounded by the famous Tamil poet Poongundran.