A commemorative postage stamp on the International Peace Year, recognized in 1986 by the United Nations : 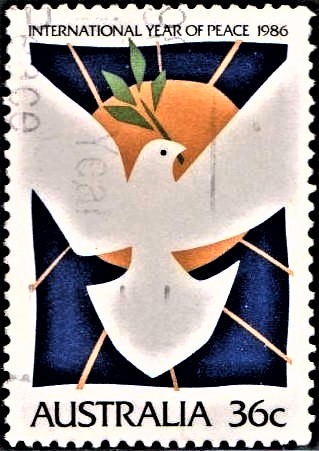 Design : The design for the stamp features a white dove, traditional symbol of peace. The dove is set against rays of light radiating out from the sun to suggest hope for the future.

The official United Nations emblem for International Year of Peace is shown next to the stamp.

Designer : Ken Cato is one of Australia‘s most successful graphic designers, with a formidable list of national and international awards to his credit. He has been involved in the design of several Australian stamp issues, in particular the Ausipex 84 World Philatelic Exhibition held in Melbourne. He also designed the Christmas stamps for that year featuring Australian stained glass windows.