A commemorative postage stamp on the WHO drive to eradicate Malaria : 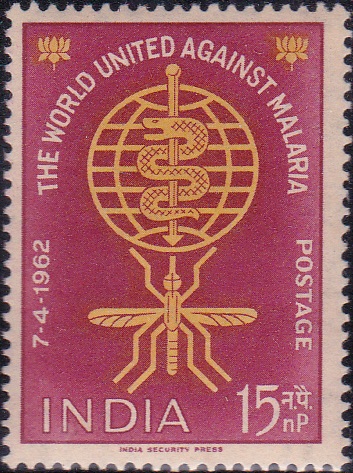 Issued for : The Posts and Telegraphs Department joins the campaign to create a greater awareness of the problem by issuing a special postage stamp on April 7, 1962. The stamp is being issued in response to an appeal by the World Health Organization to various countries and carries the slogan “The World United Against Malaria“. April 7 has been chosen by the Indian Posts and Telegraphs Department for the issue of the stamp as this day happens to be the World Health Day. The design carries in the upper part the Globe as a symbol of worldwide co-operation. The lower part of the stamp shows the anopheline vector of malaria attacked by the Aesculapean staff.

Designed by : Staff artist of the India Security Press