A commemorative postage stamp on the Adi Shankara (Shankaracharya), an 8th century Indian philosopher and theologian, doctrine of Advaita Vedanta : 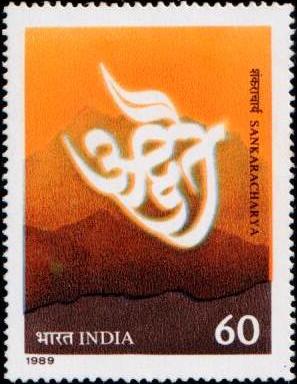 Description of Designs : The stamp has been designed by India Security Press Nashik Road on the basis of design supplied by Shri R. K. Joshi, I.I.T. Bombay through the Department of Culture. The stamp depicts the word “Advaita” in stylised Devanagari Script. The First Day Cover is also based on the material supplied by the same Department. The cancellation has been designed by Nenu Gupta.