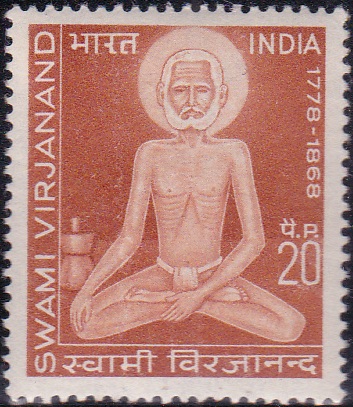 Issued for : The P & T Department are privileged to bringing out a stamp honouring this Saint. The stamp depicts the Swamiji in a sitting posture.

The design on the First Day Cover high-lights symbolically the life work of Swami Virjanand in propagating knowledge of the Vedas and other “arsha Shastras”.

Description of Design : The design of the stamp is vertical and depicts Swami Virjanand in the centre, in a sitting pose.

Born on 1778 at Kartarpur, near Jalandhar, Punjab, India