A commemorative postage stamp on the 20th Anniversary of the Colombo Plan, a regional organisation to represent a collective inter-governmental effort to strengthen economic & social development of member countries in Asia-Pacific region : 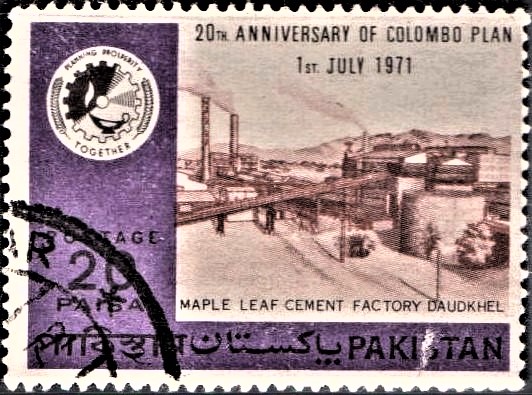 Issued for : The 20th Anniversary of the Colombo Plan is coming off on the 1st July, 1971. To commemorate the occasion the Pakistan Post Office is issuing a postage stamp of 20-Paisa denomination on the said date.

Design : The format of the stamp is horizontal. The stamp bears L shape panel in violet to accommodate the insignia, denomination and country’s name as follows: the insignia appears on the top left corner in black colour; below the insignia, words “Postage”, “Paisa” and the name “Pakistan” in Bengali, Urdu and English appears in black colour; the denomination “20” appears in black in between the words ‘Postage’ and ‘Paisa’. On the right, against white background, appears the picture of the Maple Leaf Cement Factory in black and brown colours, and below it the words “Maple Leaf Cement Factory Daudkhel” in black. On the top appears the caption “20th Anniversary of Colombo Plan 1st July 1971″ in black.