A commemorative postage stamp on the Centenary of the World Meteorological Organisation (WMO) : 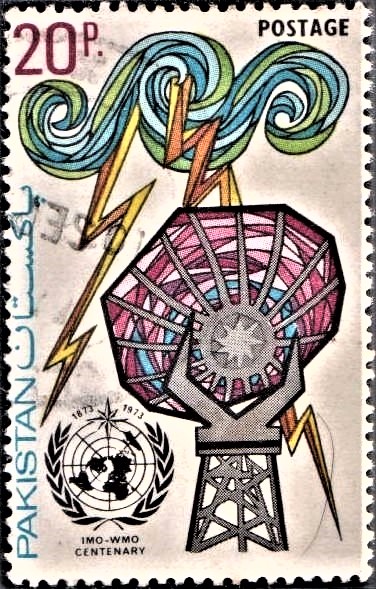 Issued for : To commemorate the centenary of IMO/WMO, the Pakistan Post Office is issuing a postage stamp of 20 Paisa denomination on the 23rd March, 1973.

Design : The stamp is vertical in format. The elements of Meteorology i.e. cloud, lightning and Radar constitute the subject of the design. The cloud is shown in abstract form at the top in blue and green colours with two bolts of lightning in yellow and orange colours shooting through it towards left and right side. The radar, also in abstract form is shown at the right side in red, blue and grey colours. The I.M.O./W.M.O. emblem in black colour appears in the lower left corner beside the radar. The denomination “20-Paisa” in red colour and the word “Postage” in black appear at top left and right corner respectively. The word “Pakistan” in Urdu and English in blue colour is placed in vertical position at the left side of the stamp.