A commemorative postage stamp on the Constitution Week 1973 of the Islamic Republic of Pakistan : 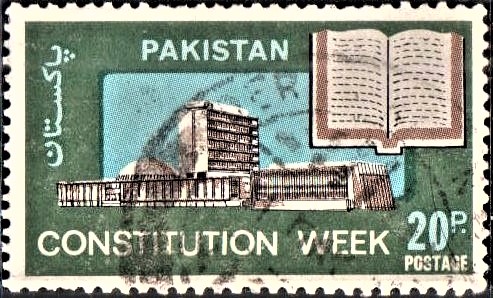 Issued for : To commemorate the Constitution Week, the Pakistan Post Office is issuing a postage stamp of 20-Paisa denomination on 21st April, 1973.

Design : The stamp is horizontal in format. The National Assembly Building and the Constitution Book form the main subject of the design. The Building which is in brown and black colours appears against light blue sky surrounded by a green border. An open book of the Constitution appears at the top right hand corner of this border in brown and black colours. The caption ‘Constitution Week’ in white appears in the lower portion of the border. The denomination figure ’20-Paisa’ in light blue colour appears in the bottom right corner with the word ‘Postage’ in reverse form. The word “Pakistan” in English and Urdu appears in light blue colour at top and left portion of the border respectively.