A commemorative postage stamp on the 150th Anniversary of the 18th Cavalry, an Indian Army Armoured Corps : 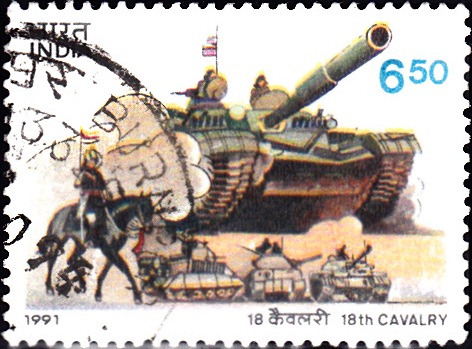 Issued for : Proud of its glorious history and traditions, the Regiment retains the old Indian cavalry spirit. Celebrating its 150th year of dedication to the profession of arms, 18 Cavalry looks forward to the future with pride and confidence in its abilities and the fighting prowess of its soldiers. The Department of Posts considers it a privilege to release a commemorative postage stamp on this proud occasion in the history of the Regiment.

Description of Designs : The commemorative stamp depicts the gradual transformation of this fine, battle-worthy Regiment. The colourful ‘Sowar’ astride his mount, dressed in regimental livery, rode away into the pages of history and was replaced, in succession, by steel steeds – the Stuart tank in 1943, the Sherman in 1946, the T-54 in 1966 and the mighty T-72 in 1983.

The first day cover provides a glimpse into an extremely rare occurrence in the history of any cavalry regiment. Having shed its horses, the Regiment converted to a motorised cavalry regiment equipped with anti-tank guns in 1940. With these the Regiment defended the desert garrison of Tobruk in North Africa for five long months in 1941 and thus wrote the most proud and memorable chapter in its history by fighting as a versatile amalgam of cavalry, infantry, artillery and commando raiders.