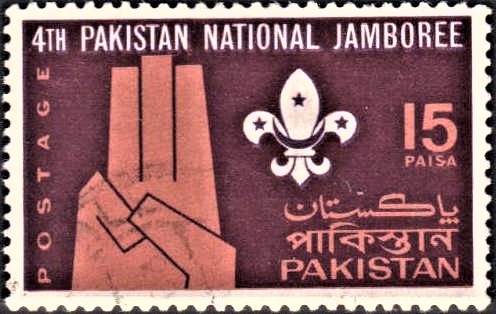 Issued for : The Fourth Pakistan National Jamboree will be held at Karachi and will be inaugurated by Field Marshal Mohammad Ayub Khan, President of Pakistan on 29th January, 1967. The Pakistan Post Office is issuing a postage stamp of 15 Paisa denomination on the 29th January, 1967 to commemorate the occasion.

Design : A Sepia background is overprinted with mauve colour. The words “4th Pakistan National Jamboree” at the head of the stamp together with the Scout emblem at centre right are reversed from both plates and appear in white. The word “Postage” appears at the left of the stamp printed in an upright position; the value “15 Paisa” appears at right; whilst the word “Pakistan” in Urdu, Bengali and English appears at the bottom right. This wording together with a symbolic hand showing the Scout Salute, which appears between the word postage and the Scout emblem, are reversed from the mauve plate and appear in Sepia.