A commemorative postage stamp on the Cooperative Day : 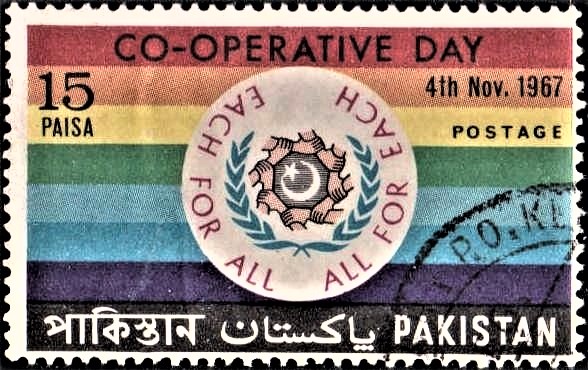 Issued for : Pakistan Post Office is issuing a Commemorative Postage Stamp of 15 Paisa denomination on November 4, 1967, to observe the International Co-operative Day and to highlight the co-operative movement in Pakistan.

Design : The circular central portion of the stamp depicts the “Co-operative Day” emblem showing the slogan “Each for all – all for each” in Red around the wreath of U.N. emblem printed in Blue. The crescent and star of emblem appear in White against a Grey ground and are encircled by a formation of hands representing co-operation among all nations.

A spectrum of colours is printed as background representing all nations of the world in an abstract form. The colour bands are printed in their natural order viz., Red, Orange, Yellow, Green, Blue, Indigo and Violet.

The caption “Co-operative Day” is printed in black on the top band of colour. Denomination “15 Paisa” appears at the top left, the date of issue “4th November, 1967” and the word “Postage” appears at top right hand of the stamp. In the bottom panel the word “Pakistan” in English, Urdu and Bengali is printed in reverse against black ground.