A commemorative postage stamp on the 25th Anniversary of the Pakistan Boy Scouts Association (PBSA) : 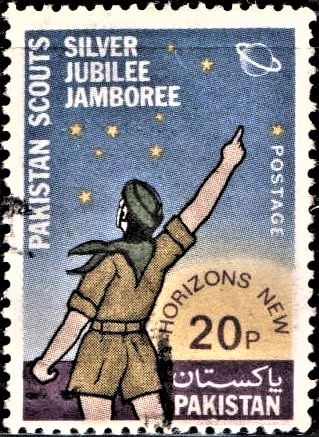 Issued for : The Pakistan Boy Scouts Association is celebrating its Silver Jubilee Jamboree on completion of 25 eventful years of its life after Independence.

Design : The format of the stamp is vertical. A boy scout wearing a khaki uniform, green scarf and a green cap is shown on the left side of the stamp facing a rising sun on the right side with his right hand pointing to the planet Mars appearing in the right hand corner against a blue sky studded with a few yellowish stars.