A commemorative postage stamp on the Australia Post Electronic Mail : 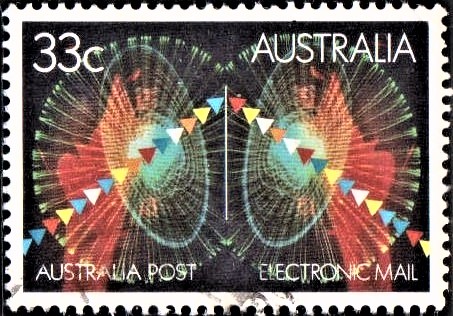 Designer : Stan Ostoja-Kotkowski, Adelaide [STAN OSTOJA-KOTKOWSKI studied art in Poland and Germany before migrating to Australia in 1949. After furthering his studies at the National Gallery of Victoria, Stan became interested in chromasonics, the use of sound to form shapes and colours. Pioneering the application of lasers to this medium, Stan used lasers for the first time on stage in Australia in 1968. Since then, he has held many exhibitions of artworks based on laser kinetics, the programmed movements of lasers to create an infinite variety of patterns and images. Combining this technique with music, Stan has also produced synchronised sound and light concerts for the Australian National University, the Sydney Conservatorium, and the Adelaide Festival of Arts. His artworks are in the collections of the Australian National Gallery, and all State galleries. The Electronic Mail design is his first for Australia Post.]