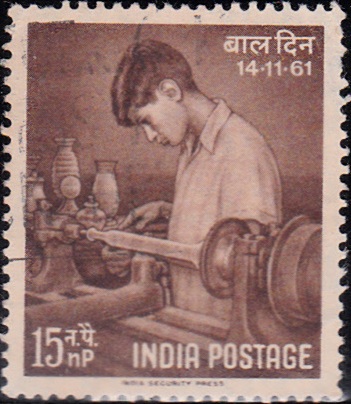 Issued for : The Indian Posts and Telegraph Department has been issuing special postage stamps on Children’s Day on November 14 every year since 1957. Children’s Day is celebrated throughout the country with great enthusiasm and has helped to focus attention on the problems of child welfare which is given an important place in the country’s plans for economic and social development. The postage stamps issued on these annual occasions bring out the theme of each year’s celebrations, which is announced by the Indian Council of Child Welfare. The theme of this year’s celebrations, as intimated by the international union of child welfare, Geneva is : “Social services for children, especially adequate protective work, safeguard the community from delinquency and maladjustment”.

Design : This special stamp, which was issued on November 14, 1961, seeks to bring out this theme. It shows a boy working at a lathe in an institution in Bombay. Such vocational training for children is intended to help them to became worthy citizens of the country.