A commemorative postage stamp on the Defence Services of India : 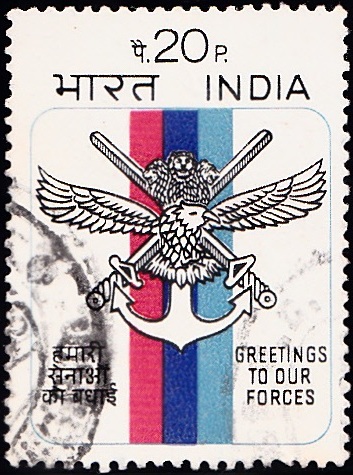 Issued for : The Indian Posts and Telegraphs Department feel highly honoured in commemorating the valiant role played by the Armed Forces of India in the cause of the Motherland during the last 25 years of Independence, by bringing out a commemorative stamp. On this occasion, the Indian P&T Department joins the rest of the country in remembering with deep gratitude the several sacrifices and hardships endured by the members of Armed Forces in continuing to keep the flag of India flying high. The commemorative stamp brought out on the occasion depicts the inter Services Crest.

Description of Design : The design of the stamp is vertical and depicts the inter Services Crest. The three strips of Army, Navy and Air Force colours are shown in the background.