Complete set of 6 nos. of commemorative postage stamp on the 25th Anniversary of the Independence : 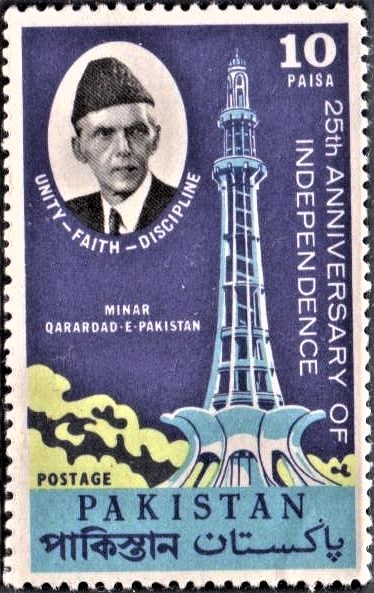 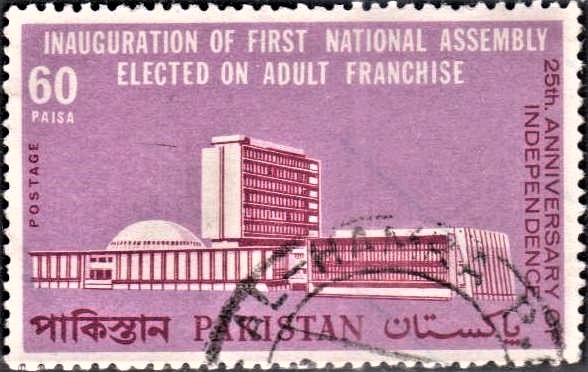 Issued for : To commemorate the 25th Anniversary of Independence, the Pakistan Post Office is issuing a set of six stamps (one of 10 Paisa, four stamps of 20 Paisa each and one of 60 Paisa denominations) on 14th August, 1972.

Design :
10-Paisa : The format of the Stamp is vertical. The portrait of the Quaid-i-Azam appears in black and white on the top left side in an oval inset against an ultramarine background. The words “Unity–Faith–Discipline” in reverse appear underneath the portrait. The Minar–e–Qarardad–e–Pakistan is placed on the right side, against an ultra-marine background and the words ‘Minar Qarardad-e-Pakistan’ lie on the left of the Minar, in reverse. The value ’10 Paisa’ is placed on the top right corner of the Stamp in reverse and the words “25th Anniversary of Independence” lie on the right side of the Stamp in reverse. The tree and foliage behind the base of the Minar are in light and dark green. The word ‘Postage’ on the bottom left corner is in dark green. A strip at the bottom of the Stamp is turquoise colour, bears the word, ‘Pakistan‘ in English, Bengali and urdu in ultramarine.

60-Paisa : The format of the Stamp is horizontal. The caption “Inauguration of First National Assembly Elected on Adult Franchise” is in reverse and is placed on the top against a pink background, the value ’60 Paisa’ lies on the top left side of the stamp in reverse. The State Bank Building at Islamabad where the National Assembly is meeting, forms the subject of the design. The words “25th Anniversary of Independence” on the right side of stamp, the word ‘Postage’ on the left side, and the word ‘Pakistan‘ in Bengali, English and Urdu placed at the bottom of the stamp are all in red colour.

20-Paisa : The format of the stamps is horizontal. The set of four stamps depicts four principle reforms. The layout is the same for all the stamps. On the left side is a decorative pattern and on the right, separated by perforation like dots the design executed symbolically which varies according to the subject. The caption “25th Anniversary of Independence” is placed on the top in red. The word ‘Postage’ lies on the right side of the stamp in blue colour. The words ‘Pakistan‘ in Bengali, Urdu and English are in black, at the bottom of the stamp. The value ’20 Paisa’ is in yellow, and is placed on the foliage, on the right bottom side of the stamp. A sky covered with stars, common to all the designs, stands for the new avenues discovered in all fields and the progress made in agriculture, industry, education and health.

The second stamp stands for the labour reform in Pakistan. In the background are factories and in the foreground are hands of labourers holding tools, on the right side of the stamp. Trees in abstract form are shown on the right side behind the foliage.

The third design symbolises the education policy showing a pen, a book and cubes with alphabet on the left side of the stamp and a school building in the background on the right, as well as trees, in abstract form.

The fourth design shows a hospital building in the background with a red cross, a syringe, bottles of medicine and a pair of surgical scissors, signifying the new health policy.