A commemorative postage stamp on the 100th birthday of Sir Mokshagondam Visweswarayya (MV), an Indian civil engineer, 19th Diwan of the Mysore Kingdom : 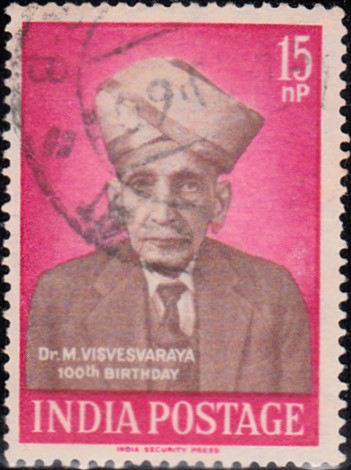 Issued for : A life so devoted to outstanding achievements would constitute a memorable record even at an earlier age but a hundred years of that life are not only worthy of commemoration but also deserving of a place of distinction in the golden lettered records of history. The P&T Department is proud of being associated with the commemoration of his centenary and the stamp which it has the privilege of issuing on this occasion is but a humble tribute from a body of grateful citizens.

Born on Sep 15, 1861 at Muddenahalli, Chikkaballapura, Kingdom of Mysore [now in Karnataka]