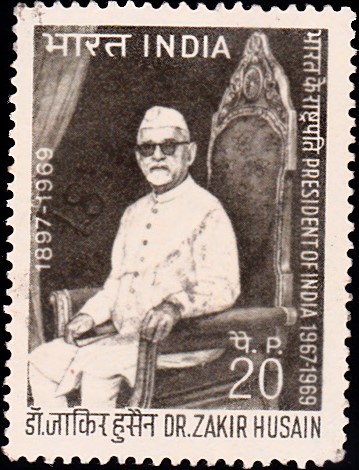 Issued for : “Among the galaxy of luminous stars that have shed their radiance on the firmament of our national life, Dr. Zakir Husain occupies a pride of place. Moulded in the great traditions set before us by the Father of the Nation, Mahatma Gandhi, Zakir Saheb was the embodiment of all-pervading humanism. In him, the nation found a true and living symbol of our composite culture. He adorned many a position with distinction, dignity and decorum. The stamp of his magnetic personality was indelibly impressed in every position he occupied. His quest for excellence has few parallels in human history.

The commemorative stamp that is being brought out to coincide with the Chehlum ceremony of the late Dr. Zakir Husain is but a token tribute of the regard and respect that we have for this great personage. I am sure his memory will remain ever green in the hearts of our people for generations to come. Zakir Saheb’s noble example will inspire the nation to fulfil the tasks – solidarity and secularism – which were so dear to his heart and to which he dedicated himself. It is now up to us to translate his ideals into reality so that we can make India occupy a premier position in the comity of nation.“ – V. V. Giri, Rashtrapati Bhavan, New Delhi-4.

“Dr. Zakir Husain represented the best in our national culture and in the world’s heritage of civilisation. In him, the intellectual, the aesthetic and the practical blended harmoniously. Rare indeed are individuals in whom thought, speech and action are so fully integrated. Distinguished and poised, he chose the profession of a teacher and throughout his life he taught us greater sensitivity, greater devotion to ideals and to selfless work. The nation mourns a great President and a great representative of the true spirit of India.“ – Indira Gandhi, Prime Minister, New Delhi, May 14, 1969.

“In issuing a special commemorative postage stamp in honour of the late Dr. Zakir Husain, the third President of the Indian Republic, the Posts and Telegraphs Department offer its humble homage and tribute to a great patriot, an eminent educationist and an erudite scholar. He symbolised the best traditions of our composite Indian culture and served the Nation with an outstanding sense of dedication to duty for nearly half a century. As the President, he had exemplified in himself our conception of a secular democracy in a very worthy manner. His keen devotion to scholastic and cultural pursuits gave a new meaning to the concept of service to the cause of education. His association with the Jamia Milia, the Aligarh Muslim University and numerous other educational and other institutions marked an era of service to the cause of education in this country.

He has been a shining example of erudition, dignity, nobility and humility. In his sudden demise the Nation has lost a leader of high intellectual and moral eminence. May his memory remain ever green with us as an example of lofty ideals and gentle behaviour.“ – Satya Narayan Sinha, Ministry of Communications and Information & Broadcasting, India, New Delhi, 19th May, 1969.

Design : Photo on the stamp – by courtesy of Shri T. Kasinath, Director, Photo Division, Ministry of I. & B., Govt. of India, New Delhi.