A commemorative postage stamp on the Energy Conservation : 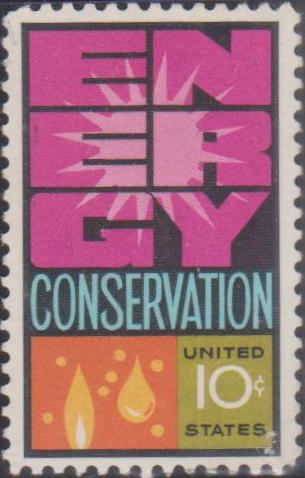 Issued for : This 10-cent postage stamp, to be issued on September 23 in Detroit, Michigan, focuses attention upon the urgent national problem of energy conservation.

Design : The public service stamp, which thematically highlights the major challenge facing the nation during the current fuel shortage, is closely allied to the Preserve the Environment stamp issued last April in connection with the opening of Expo ’74, the World’s Fair in Spokane, Washington. The two stamps, when considered together, highlight the critical issue now facing the United States: Protecting and improving the environment while dealing with the fuel shortage.

The Energy Conservation stamp design features the words “Energy Conservation” superimposed upon bright sunlight. At the lower left part of the stamp appear molecules, a drop of gasoline and a drop of oil. These symbolize containment of different forms of energy.