A commemorative postage stamp on the 1st Indian Expedition to Antarctica : 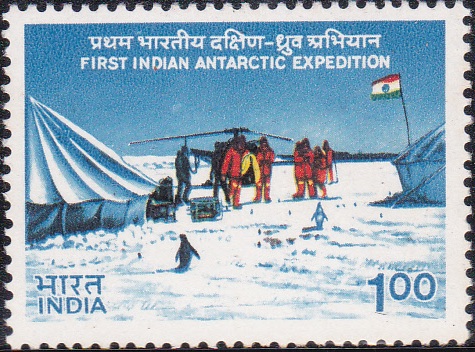 Issued for : Indian Posts & Telegraphs Department is privileged to issue a special stamp to commemorate the landing of the first Indian Scientific team on Antarctica.

Description of Designs : The stamp designed by India Security Press is based on the photograph (Courtesy : Department of Ocean Development) showing the Indian Scientists in their camp in Antarctica. The first day cover design comprises a collage of photographs showing different activities of the Expedition along with the map of the Antarctica. Cancellation has been designed by Charanjit Lal.