A commemorative postage stamp on the 500th Birth Anniversary of Guru Nanak, founder of Sikhism and 1st of ten Sikh Gurus : 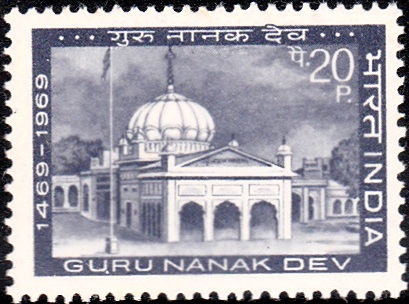 Issued for : The 500th Birth Anniversary or Guru Nanak is being celebrated the world over this year and the Indian Posts and Telegraphs Department is proud indeed to associate itself with the celebrations by bringing out a special stamp depicting Nankana Sahib, in honour of this great son of India.

Description of Design : The design of the stamp is horizontal and depicts a picture of Gurudwara “Shri Nankana Sahib”.

One thought on “Guru Nanak Dev”