A commemorative postage stamp on Apollo 11, the spaceflight that landed the first two people on the Moon : 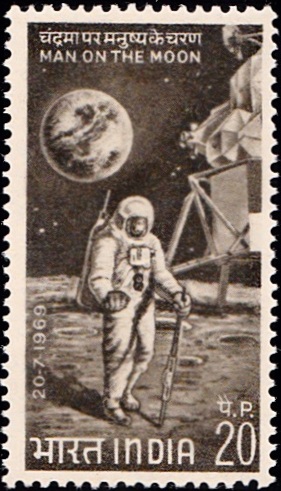 Issued for : While complimenting the astronauts of Apollo 11, Edwin Aldrin, Michael Collins and Neil Armstrong, the Indian P & T Department wishes to express its good wishes and appreciation for their achievement. At the same time, the Department wishes the astronauts of Apollo 12 a happy landing and safe return to the good old earth. In token of admiration of this memorable event, the P & T Department has great pleasure in issuing a commemorative stamp depicting ‘Man on the Moon’.

Description of Design : The design of the stamp is vertical and depicts a man on the moon with the Lunar Module and Earth in the background.