A commemorative postage stamp on the Year of ‘India Tea’ : 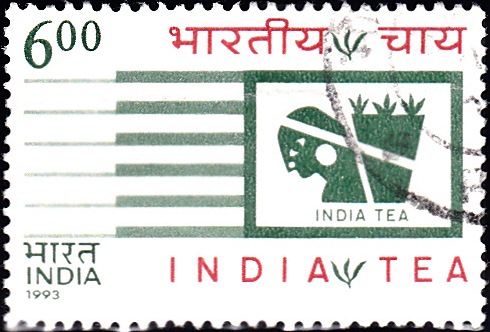 Issued for : The Department of Post happily joins the tea industry of the country in commemorating 1993 as the year of ‘India Tea’, by issuing a special postage stamp to carry the message of India Tea the world over.

Design : The First Day Cover is an artist’s conception of how Indian tea is alive to the global challenge of the 20th century. The stamp design is a graphic depiction of the tireless tea picker and the symbol of two leaves and a bud typical of the tea plantations in India. The stamp and the first day cover readily recall to mind Rabindranath Tagore‘s lines.
Come oh come
Yea tea-thirsty
Restless ones
The kettle boils
Bubbles and sings
Musically.

Design Credits : The Stamp, FDC and Cancellation are based on the materials/designs supplied by the Ministry of Commerce.