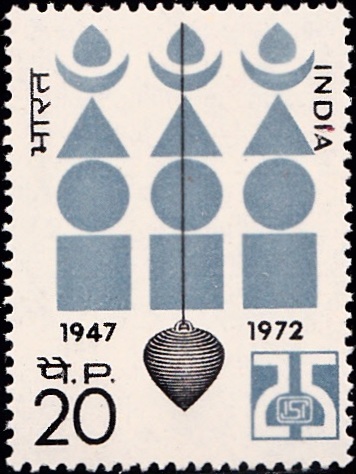 Issued for : The ISI had completed 25 years of its pioneering work in promoting, fostering and furthering the concept of standardization in India. The Indian Posts and Telegraphs Department feel privileged in commemorating the Silver Jubilee of this national institution by bringing out a special postage stamp to mark this event.

Description of Design : The design represents the traditional symbols of five elements (earth, water, fire, air and ether) and plummet showing precision. The 25th anniversary emblem of ISI is also incorporated in the design.

The design of the stamp is adapted from the original prepared by Shri A. Ramachandran, Artist, New Delhi.