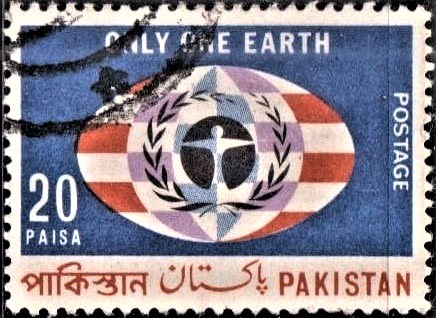 Issued for : The General Assembly of the United Nations decided to convene a United Nations Conference on the Human Environment, to be held in Stockholm, on June 5-16, 1972. To mark this occasion, the Pakistan Post Office is issuing a Commemorative Postage Stamp of 20-Paisa denomination on 5th June, 1972.

Design : The format of the stamp is horizontal. The design is based on the caption ‘Only One Earth‘; placed on the top in reverse against an ultramarine background. The official Conference Emblem in black selected for the “United Nations Conference on Human Environment” is placed in the centre of the world, symbolically represented by an ellipse, comprising of different colours, orange, purple and pale blue. The word ‘Postage’ at the right side of the stamp and the denomination “20 Paisa” at the left bottom side are in reverse. The word ‘Pakistan‘ in Bengali, Urdu and English appearing on white strip at the bottom of the stamp is in orange colour.