A commemorative postage stamp on the Golden Jubilee of the Mahatma Gandhi Kashi Vidyapeeth, a public university located in Varanasi, established by Babu Shiv Prasad Gupta and Bhagwan Das in 1921 : 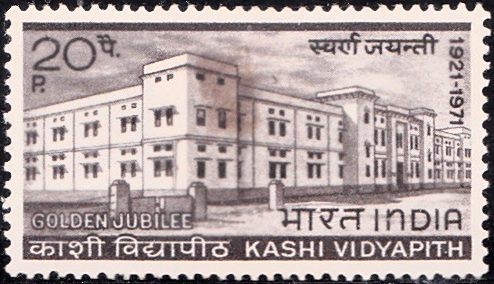 Issued for : The Kashi Vidyapith celebrated the Golden Jubilee of its inception in the year 1971. It has rendered yeomen service to the cause of education especially in the task of character-building of its alumni based on nationalistic ideals. The Posts and Telegraphs Department congratulates the Kashi Vidyapith on its completion of fifty years of useful existence and service to the cause of education and is happy to associate itself with the golden jubilee of this national institution by bringing out a special commemorative stamp on this memorable occasion.

Description of Design : The design of the stamp is horizontal and depicts the picture of the Vidyapith building.