A commemorative postage stamp on Vir Kunwar Singh, chief organiser of the fight against British East India Company during Indian Rebellion of 1857 in Bihar : 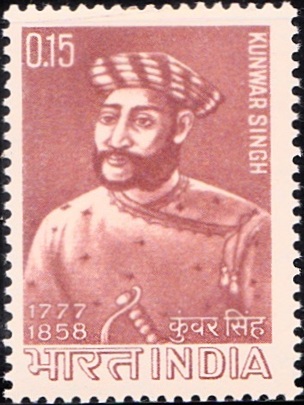 Issued for : The name of Babu Kunwar Singh epitomises the spirit of liberty in this land which was quietened but never quelled and which was to triumph in less than a hundred years after Kunwar Singh laid down his life. On 23rd April, 1966 falls the anniversary of Kunwar Singh‘s last and greatest victory. On this occasion the P & T Department feels privileged to issue a commemorative stamp in honour of this illustrious fighter for freedom.