A set of two commemorative postage stamps on the Pakistan’s Hockey Victory at the 19th Olympic Games, Mexico : 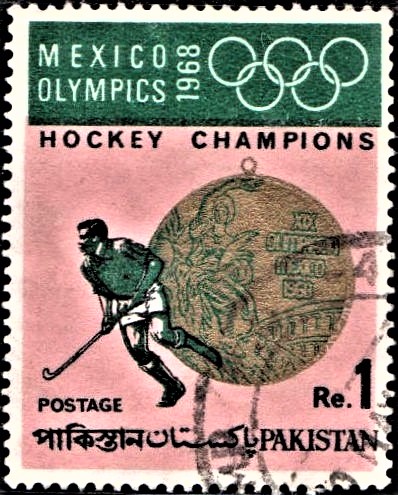 Design : The format of the stamps is rectangular and vertical. There is a green panel at the top, in the left portion of which appears the lettering “MEXICO OLYMPICS 1968” and the olympics rings in the right half portion, all in reverse. The Background below the panel is in pink colour in Re. 1/- stamp and light blue in 15 Paisa stamp. A hockey player is shown in action near the left side of the stamp in green, black and white, partially superimposed on a fairly large size facsimile of Gold Medal which is printed in gold and green. The inscription and other details of gold medal being in green. The word “Pakistan” in Bengali, Urdu and English reads on one line at the bottom in black. Just above this line appears the word “Postage” at the left end and the denominations Re. 1/- or Paisa 15 at the right end in black. The caption “HOCKEY CHAMPIONS” appears just below the green panel in black.