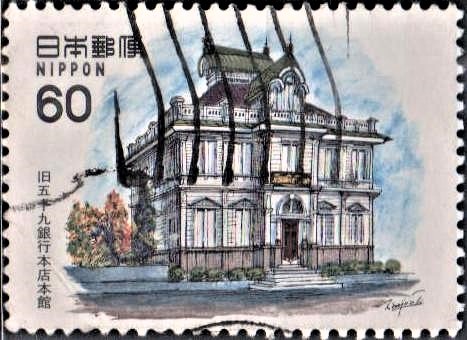 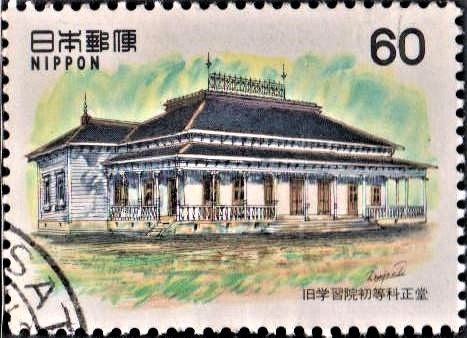 Issued for : As the 9th in the Modern Western-style Architecture in Japan Series, two 60 yen postage stamps were issued on August 15, 1983.

The building was constructed in 1904 as the main branch of the GOJYUKU Bank. The main supports of this two-storied, wooden building are of zelkova from Aomori prefecture. Japanese cedar is widely used for the fittings.

This building was built to in 1899 to function as the main building (lecture hall) of the GAKUSHUIN ELEMENTARY SCHOOL in the area of Shinjuku–ku, Tokyo (now known as Wakaba–cho).

A new main building was built in 1937 and the old building was sold and moved to Inba–gun Toyama–mura (presently Narita-shi) to function as a lecture hall for the town’s primary school (presently called the Narita City Toyama Junior High School). Presently, the building was again moved for preservation at the prefecturally administered “Bosofudoki-no-oka” building museum.

The building is an extremely rare and precious example of school architecture of the Meiji Period.