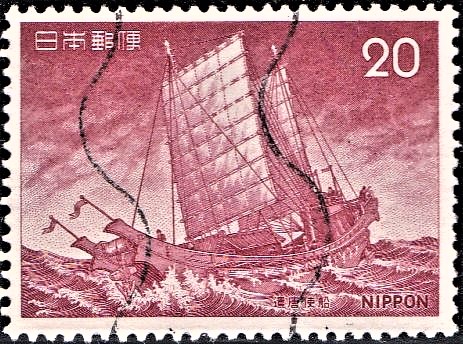 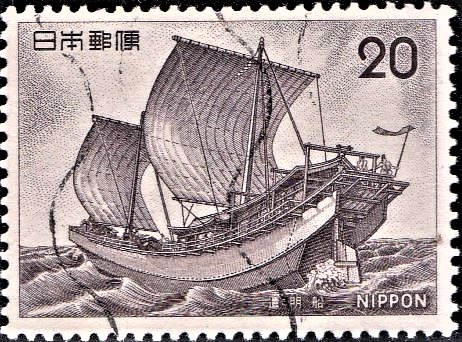 Issued for : As the 1st in the Ship Series, 2 kinds of 20 yen postage stamps (se-tenant) depicting ancient vessel’s plyed between Japan and China will be issued.

Picture : One of the 2 stamps shows “Kentoshisen“, a large Chinese-style oceangoing ship which crossed the East China Sea over a dozen times to carry Japanese envoys to and from China in the Asuka (538~645), Nara (710~783) and Heian (784~1191) periods (6th-12th centuries). Several ships of this type were used for a single voyage to carry a total of over 500 persons including chief and deputy envoys, doctors, fortune tellers and students – all heading for the ancient Chinese capital of Changan. These persons greatly contributed to cultural progress in Japan.

The other stamp bears the drawing of “Kenminsen“, a Government-authorized trade ship of purely Japanese style. The ship was used by the Government in the Muromachi era (14th-16th centuries) to dispatch its mission to the Ming dynasty. In those days, trade took the form of presenting gifts through envoys. For about 150 years until 1542, “Kenminsen” ships were sent nearly 20 times.