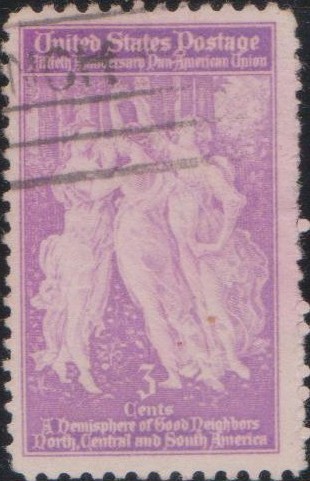 The Historic Stamp :
The 3¢ stamp marks the 50th anniversary of the Pan–American Union. The organization was formed to deal with concerns of international law and common defense, shared by the United States and its neighbors in Central and South America. In 1948, the members dissolved the Union to create the Organization of American States.

W. A. Roach designed the stamp. It reproduces The Allegory of Spring, a painting by Italian Renaissance artist Sandro Botticelli. The motto of the Pan-American Union, “A hemisphere of good neighbors”, is written beneath the portrait of the “three graces”.

The Pan-American Union stamp was printed in light violet by steel engraving. The First Day City was Washington, D.C.