A commemorative postage stamp on the Centennial of Texas independence : 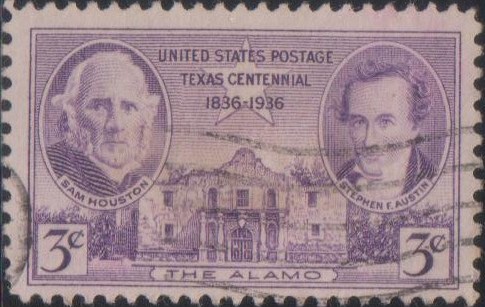 The Historic Stamp :
The 3¢ stamp celebrates the 100th anniversary of the founding of the Republic of Texas. The independent Republic lasted from 1836 to 1845, bridging the time from Mexican domination to statehood.

The Alamo, where 187 brave Texans died in the struggle for freedom in March 1836, is pictured in the center of the stamp. The portrait in the upper left is of Sam Houston, who won the final victory over the Mexicans at San Jacinto and later became the first president of the independent Republic. Stephen F. Austin is shown in the upper right. He established the first permanent American settlements in Texas in the 1820s.

The Texas Independence Stamp was printed in purple by steel engraving. The First Day City was Gonzales, Texas.