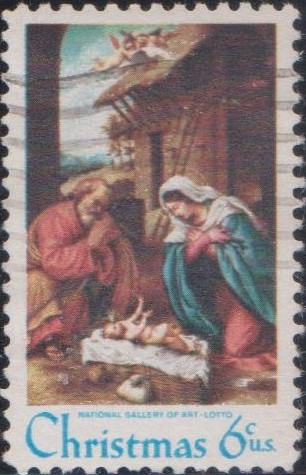 Issued for : This 6-cent Christmas stamp will be first placed on sale November 5, 1970 at Washington, D.C., in non-precanceled and precanceled forms.

Design : The stamp reproduces “The Nativity“ by Lorenzo Lotto, 16th Century Italian painter. It hangs in the National Gallery of Art.

It was printed by gravure at Guilford Gravure, Inc., Guilford, Connecticut, which was leased by the Bureau of Engraving and Printing, and was manned by Bureau personnel. Red, blue, yellow and black inks are combined to produce the stamp in which brown tones are dominant. Howard C. Mildner, of the Bureau, designed the stamp.

Technical Details : The print order is 875 million, of which approximately one-half will be precanceled. This stamp is in addition to four Christmas stamps, printed on the same sheet, which reproduce antique toys. These will also be issued November 5, in Washington, D.C.