A commemorative postage stamp on the Peace Corps : 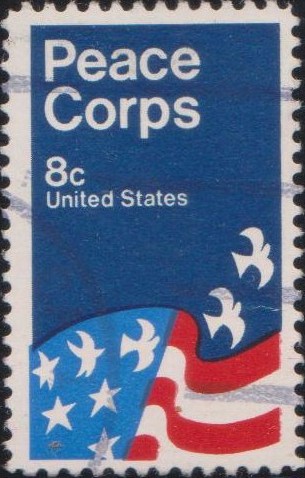 The Historic Stamp :
The 8¢ stamp salutes the efforts of Peace Corps volunteers, who work to raise the standard of living in developing nations. Since it was established in 1961, the Peace Corps has sent more than 50,000 Americans to serve in some 60 countries. These men and women provide skilled manpower in the fields of education, agriculture, health, trade, technology, and community development.

Bradbury Thompson designed the stamp, which reproduces a Peace Corps recruitment poster created by David Battle. It shows a portion of an American flag, with doves of peace flying out to the world above it.

The Peace Corps stamp was printed in dark blue, light blue, and red by photogravure. The First Day City was Washington, D.C.