A commemorative postage stamp on the Centenary of the Population Census of Pakistan : 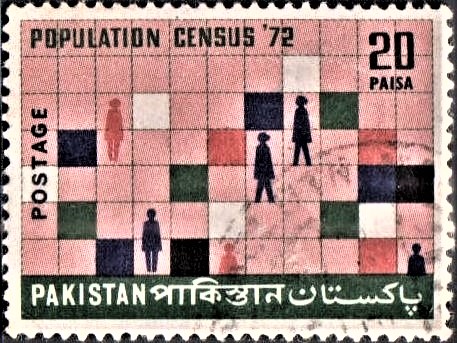 Issued for : The Pakistan Post Office is issuing a stamp of 20 Paisa denomination to commemorate the Centenary of Population Census of Pakistan on 16th September, 1972.

Design : The format of the stamp is horizontal. A graph is shown by means of thin dotted lines in green against a pink background. Silhouetted human forms in red and ultramarine colours are shown in different places to represent adults and children. Also some squares in White, Red, Green, Ultramarine and Black colours are shown in different positions to depict certain statistical features of the Census.

The wording “Population Census 72” in Green colour appears at the top. The denomination figure ’20’ with ‘Paisa’ underneath appears in the top right hand corner in black. The word ‘Postage’ lies on the left hand side of the stamp vertically, also in black. The word ‘Pakistan‘ in English, Bangla and Urdu appear in reverse in the green panel at the bottom of the stamp.