A commemorative postage stamp on the 7th Naval Review by the President of India : 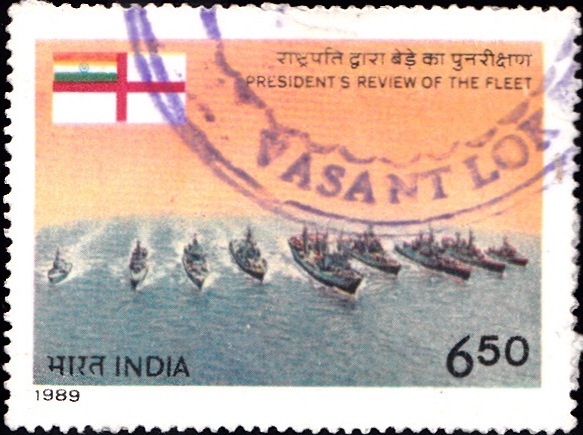 Description of Designs : The stamp depicts a naval task force heading towards its mission and has the Naval ensign on the top left corner. The stamp has adopted a photograph taken by Cdr DS Brar of the Indian Navy.

The First Day Cover carries the logo of the 7th Review, depicting the Naval crest and a composite group of five silhouettes of some of the Indian Navy’s prized possessions symbolizing its three dimensional role viz., on the sea board, in the air and in the ocean depths. In the far horizon is the Navy’s 2nd Aircraft Carrier Viraat and Sea–king class anti-sub-marine attack helicopter. In the middle distance is a Rajput Class, guided missile destroyer. The nearest silhouette is that of the indigenously designed and built Godavari Class guided missile frigate – the only frigate-sized ship in the world to carry two Sea-king helicopters. In the fore-ground is a Shishumar class SSK submarine. The co-authors of the stamp & cover are Commodore Anil Dhir and Captain Arun Sachdeva of the Indian Navy.

The three circular segments on the top of the cancellation represent three arms of the Indian Navy, namely, the Naval Aviation, the Surface Forces and the Submarine Arm. The President of India is represented by our emblem at the centre. Seven anchors around the national emblem represent the 7th President’s Review of our Fleet. It has been designed by Commodore Anil Dhir of the Indian Navy.