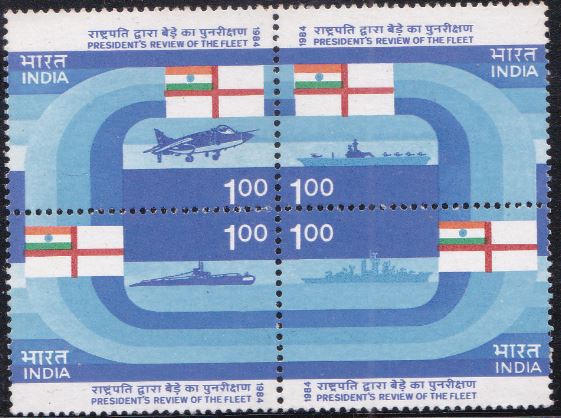 Issued for : Indian Posts and Telegraphs Department is privileged to issue a se-tenant set of four commemorative stamps on this occasion.

Description of Designs : The se-tenant set is a composite picture depicting the three dimensional strike capability of the Indian Navy, silhouettes of an aircraft carrier and a vertical Take Off and Landing aircraft, a missile destroyer and a submarine. The three elements viz, the sky, the surface and the ocean depths are represented by a circular band in three shades of blue. The Naval Ensign is repeated in each of the four stamps of the se-tenant. The co-authors of the se-tenant are Captain Anil Dhir, IN and Sudarshan Dheer.