A commemorative postage stamp on the Resumption of the Antarctic Expedition of Japan : 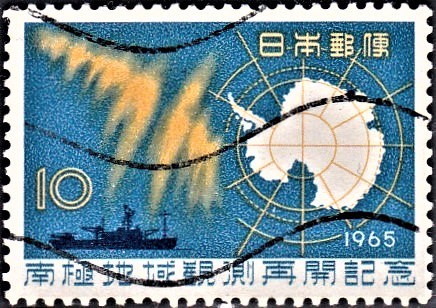 Issued for : Since the 6th expeditionary party returned from the Antarctic in 1962, on party from Japan has been in the area; but the expedition is re-opened in 1965, and the party goes to the Antarctic on November 20 on board the Fuji, newly-built modern ship for observation.

Design : Map of Antarctica, aurora and the observation ship “Fuji“.