A commemorative postage stamp on the 50th Anniversary of A.A.A. : 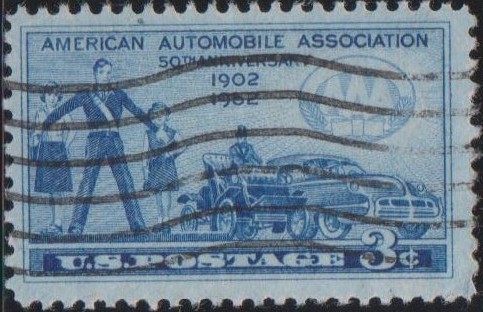 The Historic Stamp :
The 3¢ stamp celebrates the 50th anniversary of the American Automobile Association (AAA). Founded as an aid to motorists in 1902, the organization is headquartered in Falls Church, Virginia. It has grown up with the automotive industry and now has more than 28 million members throughout the United States.

The stamp design shows the familiar AAA logo above a vintage 1902 automobile and one manufactured in the early 1950s. The scene on the left calls attention to the safety programs the association has supported over the years. It shows a school safety patrol member preventing two young girls from making a dangerous crossing.

The American Automobile Association Stamp was printed in deep blue by steel engraving. It was first placed on sale in Chicago, Illinois.